Vero was settled by early pioneers in the 1880s. One of Vero’s most notable early settlers was Henry T. Gifford. In 1887, he built a house which is now located near present-day City Hall. He operated a citrus grove business and established Vero’s first mercantile store which also operated as a post office, express office and railroad ticket office. The story of how “Vero” got its name is often attributed to his wife Sarah who suggested the settlement be named for its Latin meaning, “to speak the truth.”

In 1893, the Jacksonville, St. Augustine and Indian River Railroad tracks reached the Vero settlement and Henry Flagler’s dream of building a railway through to Key West was coming closer to fruition. Trains not only provided much needed farming, building and cooking supplies, helping to make Florida’s wilderness more habitable, but improved commerce by providing faster transport of agricultural products and other goods. 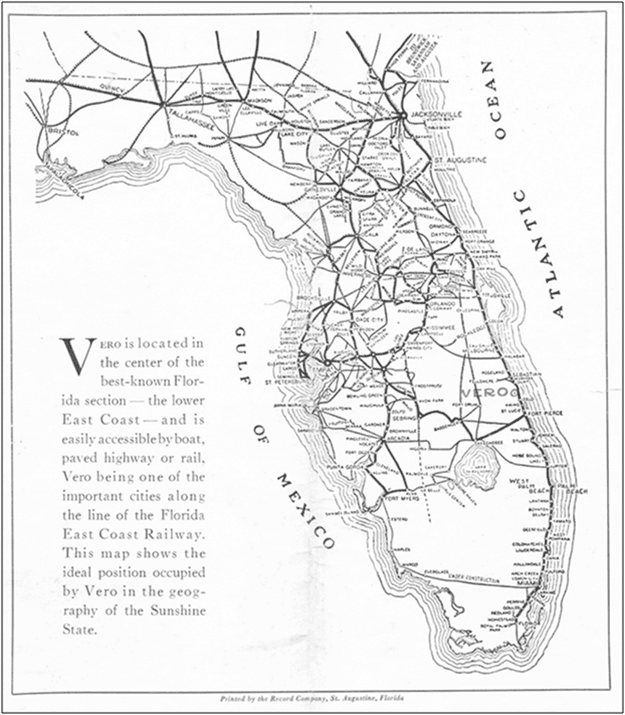 In 1912, the Indian River Farms Company, composed of Iowan and Illinois businessmen, undertook an extensive land reclamation project purchasing 44,000 acres in present-day Indian River County. Their business plan included a vision for a town that would become “one of the finest in Florida.” The final plat of the original ‘Town of Vero’ was adopted in 1913. Herman J. Zeuch, who later became President of the Indian River Farms Company, played an important role in the town’s design. In 1915, the company launched a City Beautiful Campaign, which inspired many residents to make beautification efforts that can are still visible today in the Vero’s historic neighborhoods and landscapes.

In 1919, the City of Vero was incorporated. In 1925, a number of Vero’s most prominent citizens successfully lobbied in Tallahassee for the creation of a new county that they named “Indian River.” Vero was designated the county seat and was re-incorporated and re-named Vero Beach.

Like other Florida Towns, there was significant growth and retraction during the Florida Boom and Bust era. During World War II the United States Military established a Naval Air station north-west of the original town and performed many training exercises off the coast. In 1947, the Brooklyn Dodgers selected the former Vero Beach Naval Air Station as their permanent Spring Training facility. Today, part of the property is occupied by the Vero Beach Municipal Airport and the Historic Dodgertown,formerly known as “Dodgertown.”